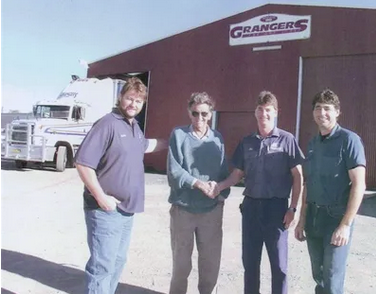 In 1953, the company was founded by Hugh Granger. He started with a tray top truck by completing small local freight jobs, and also a general freight return run from Sydney. In 1962, Hugh married Pam and together they built Grangers Freight Lines into the region's largest freight company.

The growth of the business took many different avenues, including crane salvage, and furniture removal. The salvage business took form due to the conditions of the time, with old roads and poor break systems being the common problems for truck accidents across Australia, including our local area. The furniture removals and parcel freight side of the business quickly grew with the changing times, and this brought three rigid vehicles and six employees into the business, which was a major factor in the development and success of Grangers Freight Lines.

During the early 1980's, (and as roads and vehicle technology improved) Hugh decided to wind down the salvage part of the business and sell  the furniture side of the business to focus solely upon the parcel freight, and general freight transportation. The freight sector of the company was rapidly growing, and required the full attention of Hugh so he could continue to provide the high level of service his customers had come to expect from Grangers Freight Lines.

In 2003, Grangers freight Lines celebrated its 50th year of service. This saw the beginning of the new era. Hugh decided after half a century of loyal service to his community and beyond, that it was time to retire. He handed the running of the business to his three sons, Peter, Michael & Rodney.

The Granger boys continue to run the company today, with the additional benefits of new technological advances but the same values and standards the their father, Hugh, had set for the business through the 50 years of service.

In 2006, Hugh sadly passed away in January of that year, he was aged 72. Although he is sorely missed, his legacy and dream for the business is still alive and stronger than ever.

Pam Granger still maintains an involvement in the company as Owner & Director, and together with Peter, Michael & Rodney and their dedicated team at Grangers Freight Lines will take Hugh's legacy and dream to ensure the business will continue to prosper well into a long future ahead.